Ballyhoo Theatre in collaboration with Act One Dance
November 2001

With equal measures of pluck and positivity, little orphan Annie charms everyone's hearts despite a next-to-nothing start in 1930s New York City. Annie is determined to find the parents who abandoned her years ago on the doorstep of an orphanage run by the cruel Miss Hannigan. Annie eventually foils Miss Hannigan's evil machinations, finding a new home and family in billionaire Oliver Warbucks, his personal secretary, Grace Farrell, and a lovable mutt named Sandy.

Ballyhoo Theatre in collaboration with Act One Dance
January 26-27, 2002

Since it first hatched in 1993, Stiles & Drewe's musical, Honk!, has winged its way around the world in over 8,000 productions and in many different languages. Winner of multiple awards, including the 2000 Olivier Award for Best Musical, this heartwarming celebration of being different is sure to delight audiences of all ages with its sparkling wit and memorable score.

Ugly looks quite a bit different from his darling duckling brothers and sisters. The other animals on the farm are quick to notice and point this out, despite his mother's protective flapping. Feeling rather foul about himself, the little fowl finds himself on an adventure of self-discovery, all the while unknowingly outwitting a very hungry Cat. Along the way, Ugly meets a whole flock of unique characters and finds out that being different is not a bad thing to be. 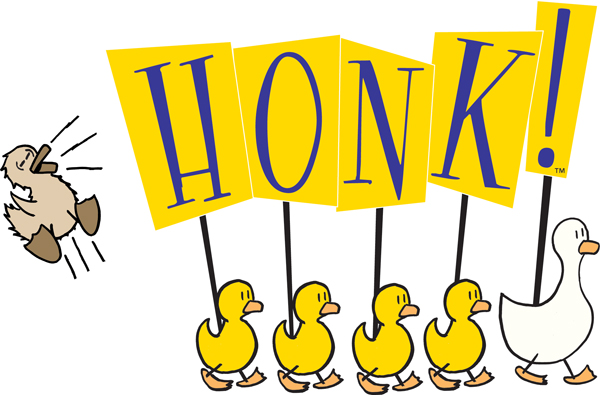 Ballyhoo Theatre in collaboration with Act One Dance
March 2002

Book by Judy Wolfman
Music and lyrics by David Reiser

Everyone has listened to the immortal yarn of Little Red Riding Hood and a hungry wolf. But it’s rare we get a chance to hear the infamous Wolf’s point of view of this popular story. In this story, however, our compassionate and sympathetic beast is understandably upset. He has been maligned for generations because of the well-known children’s parable. Determined to defend his own good intentions, he reveals Red Riding Hood’s real nature...rarely shown to the outside world and shows that there are two sides to every story.